Wrapping your head around Amazon PPC can take a lot of energy and time. That’s especially true today, where you have a wide variety of options for different advertising types, such as: Sponsored Brand, Sponsored Display, and Sponsored Products, as well as manual, retargeting, and auto targeting types.

The nature of Amazon PPC, Amazon advertising bidding, and Amazon manual targeting just gets more in-depth and complex as you continue to add SKUs and product types for various niches. 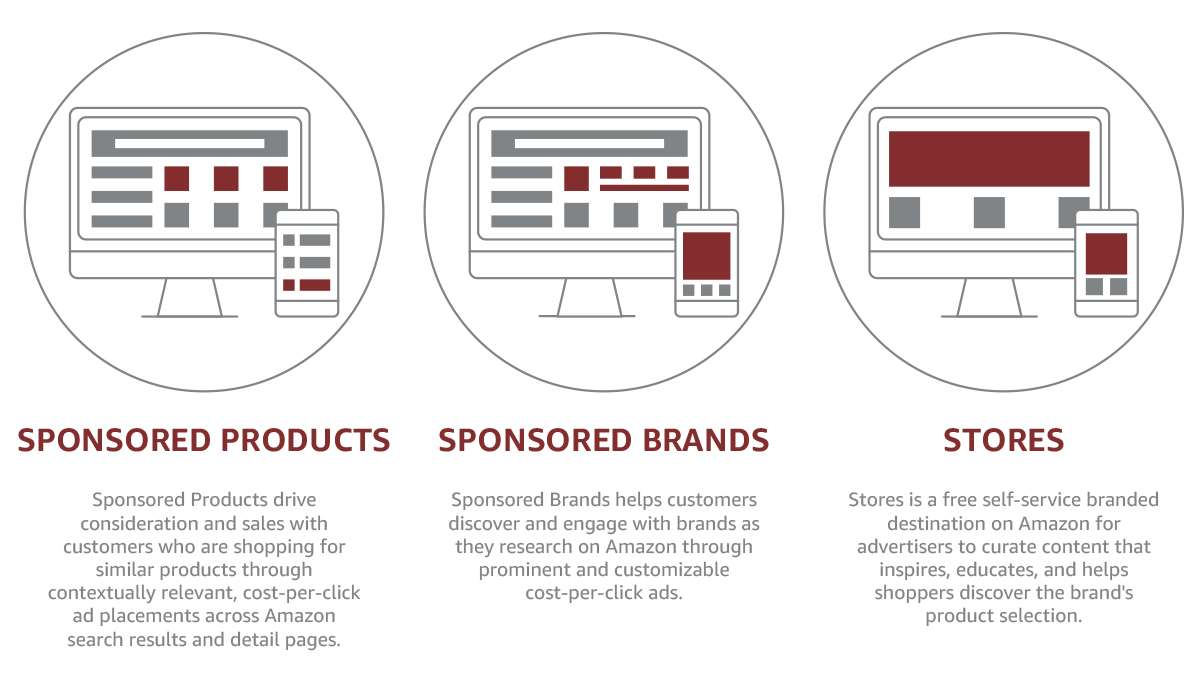 What Exactly Is Amazon Suggested Bid?

Essentially, when you go to update an ad group or generate a completely new campaign, there will be a range and a corresponding bid that’s suggested for you on the Targets tab:

Take a look at the dropdown menu and choose the Suggested Bid tab. It will then alter all your default bids to newly suggested bids.

In a nutshell, that means that Amazon will be the one making the decisions on which products show similarities within your estimated bid range. Your keyword's suggested bid will always fall within that suggested range.

What’s the Reason for a Suggested Range?

Since you know the suggested bid is coming from Amazon sellers with products that are more or less similar to yours, you may be asking yourself:

I’d love to be able to explain it in black and white terms, but unfortunately, it’s not so simple. Since Amazon PPC does not make their formula known to the public, we can only analyze and make an educated guess. The question is still very much relevant for understanding the suggested bid’s limits, however, and will help you make smart decisions based off the data provided.

The suggested bid range is the unit of bids that won the impressions to the keyword with ads that are similar. With this knowledge it’s safe to assume that the similar ads have functionalities that operate in a similar fashion, including price, categories, and keywords.

If the product you’re selling is an add-on or an accessory rather than the main product itself, you can take suggested bids with a little bit of a grain of salt. This algorithm can, at times have a hard time differentiating the two, so the suggested bid may be way off.

It’s easy to see how this could lead to overbidding and dramatically overpaying for products due to one bidder throwing an excessive amount of money toward a product.

How is Amazon’s Suggested Bid Calculated? 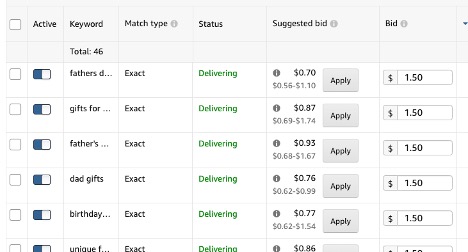 The main motivation of this feature is to set a bid that will ultimately get clicks going back to you. Now, this certainly does not ensure that you will get the same results as some of the other advertisers. 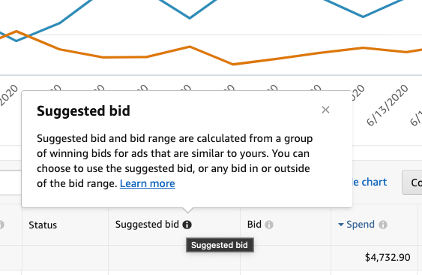 If you move your cursor over the top of the tooltip, you'll see the suggested bid range pop up.

If you’re someone who’s bidding up against a large number of keywords (say, 100 or more), then you probably shouldn’t be utilizing suggested bits. It will ultimately eat away all your budged for your campaigns. The key here, is that initial campaigns need to go through a harvesting stage and collecting as many keywords and the profitable bid to sustain when running the ADS.

This means spending money on different keywords and different pricing points to see what converts, and overall seeing you ROAS on a per-keyword and per-campaign level.

If you have the budget, go ahead and bid – that’s okay, but expect the costs will be higher.

Make sure to take your time, and bid on the lower end on the keywords you don’t have a whole lot of data for. This will help you leave room in your budget for the keywords that are actually making big sales and all the difference for buyer intent.

You also shouldn’t be bidding on things that are way out of your ACoS target.

How You Should Be Using Suggested Bid

Make sure you have a good idea of the margins of the products you’re selling this will enable you to make calculations on your breakeven ACoS. It’s important to note that the implied data will always have a much higher degree of accuracy than Amazon Suggested Bid will.

By that I mean Amazon PPCs data shown previously on the winning bid that is needed to be awarded the keywords for the products you have.

You can pull this information through the Amazon Advertising report feature. You simply have to load the search term and take a look at the keyword’s reports. This won’t account for your COGS though, so be careful here.

The main thing you want to be looking at is the CPC (cost per click). the CPC is an indicator of how much money is required to get one-click for that keyword. Keep a close eye on that metric when placing your bids!

This Amazon Suggested Bid feature is really for sellers who don’t have a whole lot of prior data and information to go off of, or are harvesting new keywords for new items, campaigns or launches. In our opinion, this is Amazon’s way of driving up the bidding prices for the overall bidding auction, and bolstering the bid curve.

Even more puzzling, suggested bids don’t seem to adhere to Amazon’s outline they presented themselves about their feature. It’s not really based on what your competitors are bidding, rather more favored for high bids and what amazon wants to charge you for particular keywords.

The calculations could basically slap a premium on keywords they believe are going to be low-converting by the products you offer, or based off what they believe the profit margin will be for your products.

If you’ve got the data to go off of, you should really be making the effort to go through all the data by your account and get your bids optimized relative to the goals of your campaign.

Get our full training course on Amazon Advertising for beginners!

Sign up below to get the latest newsletters, product updates, exclusive content & more from Sequence directly to your inbox

Sequence is the first eCommerce accelerator to help your company grow faster, protect your brand, and sell globally.